When Seabury S. Gould founded his pump company in the mid-1800s, he knew he had a good thing going. He believed in the material and the design, and he was proud to be the man behind fresh flowing water for the pioneers opening the West, the farmers in the East and the plantations down South.

What Gould didn’t know, and probably couldn’t have imagined, was that the pump would become the heart of industry. He had started his family — and many other families — down a path that would become one of the country’s proudest manufacturing legacies.

Though the company has been part of Xylem as Goulds Water Technology (GWT) since 2011, family is still a predominant theme as pumps are designed, engineered and assembled in its facilities in Auburn and Seneca Falls, New York. Employees proudly produce nearly 2,500 residential and wastewater pumps each day as part of GWT’s comprehensive portfolio of products — including residential 4-inch and 6-inch submersible pumps, jet pumps, sump, effluent and sewage pumps, prepackaged systems, multi-stage and end suction pumps, and a host of other accessories and controls. 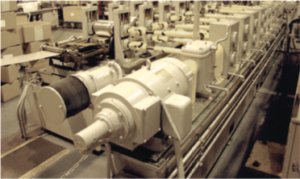 Goulds Water Technology has been producing pumps since the mid-1800s.

Generations of families have proudly worked at GWT, such as the Haas family.

Chris Haas remembers his interview at GWT. He was 25, right out of Auburn Community College. Two out of the four men he talked with that day knew someone in his family and a third knew his father, Ken Haas, who also worked there.

Haas got the machinist job he wanted, and 26 years later, he’s a high reach forklift truck driver in Seneca Falls, having worked all three shifts at one time or another. He machined driveshafts for pumps that move 100,000 gallons of water a minute, made casings for submersible pumps and programmed tooling specs into computer controlled machines that made parts and pieces for industrial size pumps he could walk through.

Now as a material handler, he uses a 9,500-pound forklift to move 4-inch submersible pumps around a beehive of activity he calls his piece of heaven inside the 300,000-square-foot production facility.

“My head is on a swivel all day. Shipping and receiving are constantly moving, but I wouldn’t have it any other way.”

Chris Haas’ grandfather on the job.

For him, the best part of going to work is seeing all the familiar faces — including many from his own family. His uncle, his wife, his cousins, his daughter, his father, his grandfather and even his great-grandfather have all been employed at GWT at one time or another. Haas’ earliest memories involve him and his brother waking up early and while still in their PJs, being hauled along to “the pump shop” to drop off their father, Ken Haas, for first shift.

He says the close-knit environment is an important part of why generations of families work there and why he’s stayed for 26 years. “Of all 300 people who work here, we’re a close group,” he says. “I even know the guy who made the trusty pump in my well.”

His well has a submersible brass and stainless steel pump from GWT, signed by his friend, Tom, and emblazoned on side: “Made with pride.”

“I owe everything to this place,” Haas said. “There are great moments throughout the day, every day. We are dedicated and still have a good time,” Haas says.

“Our reputation of building excellent quality pumps here in the USA is more than 150 years old,” Haas said. “We look out for each other and are very proud to be part of it.”

Let us update you!

Connecting to your BMS
Why Choose a Hoffman F&T Trap?
Steam Vapor/Vacuum Systems